Can Teradata compete with Netezza? 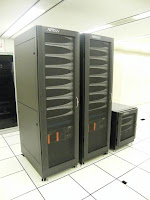 Teradata has proven itself on the test of time repeatedly at almost all the biggest airliners, banks and retail houses but it is since Oct 2007, when it spinned off its parent NCR, it has stepped up, scaled up and ramped up manifold.
V12 and V13 have addressed much of the performance glitches and moved toward being logically the best supporter of active data warehouse.

On the other hand, Netezza has been thoroughly aggressive in acquiring market and delivering the best alternative to Teradata in handling terabytes of VLDB for Fortune corps. The biggest advantage of Netezza over Teradata is the former's impressive performance in full scan on large tables. Surprisingly, Netezza went public in late 2007 too.

The best step taken by Netezza in order to suppress its cost factor has been usage of Field-programmable gate array or FPGAs. It lowers the cost and hence pricing over ASIC chips and continuous R&D has vowed to bring it close to ASIC from performance perspective. FPGAs provide the flexibility to customers to customize and thus devising a host of efficient usage of user-defined functions or UDFs.

Among both the massively parallel-processing (MPP) data warehousing solutions, different niche areas appear to be more attracted towards each of them. Where retail and banking houses are spread reasonably among two of them, Teradata appeals airliners more while Netezza is making fast advances into Telecom companies.

Some major advantages of Netezza over Teradata are lower pricing, comparable performance, higher flexibility and ELT vs ETL. While Teradata is more towards the traditional ETL way (Extract-Transform-Load), Netezza gives better ease for need-based ELT (Extract-Load-Transform). A glaring example of Netezza's growing acceptance is Teradata's biggest customer, Wal-Mart itself, which in spite of having world's largest Teradata installation has given silent entry to Netezza as well, much with an alternative thinking !
But, post-2007 Teradata's strong marketing support and relationship management team and maturity of methodologies are poised to dilute Netezza's early lead somewhat.

Though the battle has dis-intensified a bit by now and also newer solutions like UK based GreenPlum throwing challenge to both Teradata and Netezza as the nex-gen data warehouser, coming days specially as US and world economies are recovering from slump, are still worth-watching on this tug-o-war.
Posted by SACRIR - Bongosaur at 5:39 PM