Slaughtering 'Mother Divine' Cow must be banned ! Go ahead Karnataka... 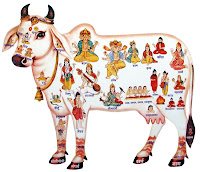 Government of Karnataka state of India has now decided to ban cow slaughter, through legislation and as expected getting stiff criticism from a corner of crooked politicians.
In the context, central government, belonging to the same self-destructive wicked house of politics, has determined to serve beef at upcoming commonwealth games. How surprising, how self-destroying, how unforgivable.


Well we can provide a hundred eco-scientific reasons to stop cow slaughter. Indian Medical Association (IMA) has enough resources citing malicious effect of consumption of beef. Cow is the symbol of agro-economy backbone of rural India. A cow feeds more than 5400 human stomachs in her lifetime. Gober is the base of natural manure for agriculture. Go-mutra is of immense medicinal value, per Ayurvedic and Yunani medicine system

Rig Veda hymn X.87 inform that God Agni prematurely terminates life span of beef-eaters, so Vedas prohibit beef-eating. Now modern science admits too that beef-eating has potential to cause deadly diseases - CJD, vCJD, GSS, etc., which are non-curable, infectious as well as genetic, terminating family tree of infected ones at a faster pace than that of non-beef-eaters.

Rig Veda hymn VIII.101.15 more specifically commands not to kill a cow: "She who is the mother of the Rudras, the daughter of the Vasus, the sister of the Adityas, the home of cosmic nectar, have spoken to men of understanding-kill not her, the sinless inviolate cow." In later Vedas, mother cow has been equated with Devi Uma herself.
Eight richas of Rig Veda and twenty-six richas of Atharva Veda practically are devoted to cow as devi and even commands to punish the cow-slaughterer severely.


The Hindustan Times, dated Feb 2, 2004 in its news under head "Deoband School asks Muslims to avoid sacrificing cows on Baqr’id" quoting Mufti Habibur Rahman of Darul Uloom says: "As Hindus respected and worshipped cow, the Muslim community should sacrifice, so, instead of cows, other four-legged animals."

And I believe, if dialogues are initiated, Muslim community of India would have no problem refraining voluntarily from killing cows. But I do not trust the hopeless school of politics, who are either driven by a family-run party or few half-educated goons and who can go to any extent to keep on ruling (read, looting) the nation. We must get rid of this self-destroying flock of Neros. We must ignore them and hence urge Karnataka government not to pay any heed to what Devegowdas and Kuamaswamys are blabbering and must go ahead passing legislation to ban cow-slaughter in the state.
I hope, other states will follow Karnataka soon.